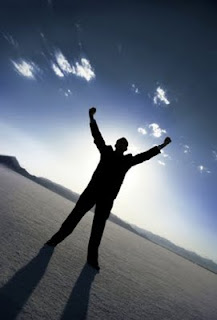 Tonight is part 6 of a 30 day committment. To read about how I am blogging to change my life please read here first.

It was amazing how quickly I started to feel better. DST was located in California so I worked from my house in St. Johnsbury. I remember riding my bicycle for the first time in a long time and riding a wheelie for a couple miles and smiling. It seemed that I had not done a lot of smiling and it felt good to feel good again!

The stress didn't completely stop when I quit the auto parts store. I still lived in the same town and I started to hear that Dad was telling people that he had fired me. I decided that in order to truly be free from the situation I needed to move. We put our house on the market. I couldn't wait to get out of that town and away from my Dad. My general mood was changing and I was starting to see that I was more in control than I had thought.

Dst had sent me to an industry meeting and I ended up seeing the founders of Point 5 Technologies. They were guys my age who were in the middle of building a technology company. The founder, Don Avelino, had been through a similar path as me. His Dad had a chain of Tire stores and he left to develop this company. He and his right hand man, Doug Portner, had visited me at the auto parts store when their first version of the "iphone" had come out to see if I would be interested. We had instantly hit it off. They were innovative and trying to solve supply chain issues, but were doing it from the other point of view from my experience. They had owned service centers, and I understood the supplier point of view. When we talked the ideas seemed to flow like water and they struck me as stand up people. This was a trait that I was looking for when deciding who I want to be associated with.

At the meeting they found out that I had left Dads company and started asking me about my position at DST. I had only been with DST for a couple months, maybe 6 at the most. Again, we hit it right off and they told me that they would be interested in hiring me. I couldn't believe it. In a short while I had gone from having no self confidence to being full of optimism surrounded by opportunities.

When they told me how much they were prepared to pay me I was stunned. I gave DST my 2 week notice and began working for Point 5 Technologies. This was an entire new world for me. I traveled almost non-stop. I was on planes from Monday until Friday or Saturday morning then I would start all over again. It was super fun work, even though it was lonely being away from Amy, Max and my new daughter, Isabel. But...I was happy. As the Director of Business Development I would explain how our software would bridge the gap between the service center and the supplier to buying groups that represented huge dollar amounts. Since I had knew so many people in the industry it was easy explaining how I had done a similar program with my customers and how it improved sales.

I was also the project manager for the actual software. I worked hand in hand with the developers and Don to keep the software moving forward and bringing improvements to market. I loved this job. Again, I seem to have discovered that I had a connection with using technology to solve problems and it made my mind dance.

When things had turned sour at the auto parts store I started to think that I should start my own business. I didn't know what I should do, but I thought that it might be time to be the guy in charge. This was the tiny seed that later developed into a full blown passion. While I was working for DST and Point 5 it sat dormant, but it didn't go away.

Tomorrow I'll talk about the beginnings of National Powersports.
Posted by Nathan Sanel at 1:52 PM

I guess I'll have to go back and read from the beginning since I have no idea who DST is. Where is todays blog?