That day, for no particular reason, I decided to go for a little run. 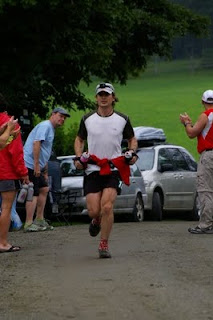 Today is part 10 of a 30 day commitment. To read about how I am blogging to change my life please read here first.

If your a runner, you probably know where the title of this post comes from. The most over quoted movie involving running, Forest Gump.

Most of you know that I run Ultra-marathons. An ultra is considered any distance over 26.2 (standard marathon). I get called Forest Gump all the time. Most people consider running a marathon one of the hardest physical challenges in the world. They talk about "the wall". It is the area of the marathon, usually explained as about mile 20, where the body's muscles run out of glycogen and become depleted of usable energy.

I'm here to tell you that it doesn't exist. Its bull. It becomes reality for people who believe it because they are so afraid of it. They wait for it and look for any sign of it happening and give in to it. It is the power of suggestion at work in a big way. Once you realize that you shouldn't take what everybody says to you as gospel, you start living your life based on your experiences, not what you expect to happen based on what you've been told.

Here's another secret. Anybody who can walk can run 100 miles. Almost every time I tell somebody that I ran 100 miles in less than a day they say that they could never do that. The reality is that they have never considered what it might take to accomplish it. It needs to be broken down into bites and it takes time to prepare for it. I think it would be more appropriate if people said "TODAY, I couldn't do that". All it takes is patience, vision and dedication. It is the same formula for getting anything you want in this world.

I started running in the most innocent fashion. I have been extremely active my entire life. I lived on my BMX, mountain bike and snowboard from the time I was 11 until I was in my late 20's. As the business was taking off I noticed that I was spending a lot of time in front of the computer. I also noticed that I was gaining some weight and didn't like how I felt. All of the sports I was into seemed to require specialized equipment and travel, and I just didn't have a lot of time.

Amy suggested that I go for a run. We lived in a cul-de-sac that was one mile around and it would be easy to go out the door and get some exercise. I really thought that running was stupid. I like to go off jumps and go fast. Why would I want to run? I bought a pair of running shoes and ran twice around the neighborhood. It was 2 miles. I felt like the worlds biggest dork. Nobody likes to be seen running when they are brand new at it. It didn't seem that hard, but it sure was uncomfortable. I ended up not being able to walk for days. I have never hurt so badly.

Hurting meant that it must be working so I started running a couple times a week, gradually increasing my loops around the neighborhood. I remember telling Amy that running was stupid and she replied that I would be racing soon. I laughed and told her that she was out of her mind. Its pretty funny to think about now.

Well, my OCD behavior took over and I started running further and further. I remember that the first big goal I set for myself was to run 10 miles. I remember the day that I did it like it was yesterday. I started training for my first race, the Big Lake 1/2 Marathon. In training I did a 17 mile long run and knew I was ready. The race was the first time that I had ever run with anybody else. I had always run alone because I was still paranoid that I looked like a dork or did it wrong. I finished in 1:47 and naturally decided to try a marathon. I did my first marathon in September of that year and began to see if there were longer races. I found a 50k (31.5 miles) race in December. I ran it in 4:56. The next year after a few 50k's I ran my first 50 miler, the VT50. I finished it in a little under 10 hours. Then I started training for the big one, the Vermont 100. My first blog post is a recap of the race. It took me 23 hours and 47 minutes. This year I was back and finished in 20 hours and 29 minutes for 18th place. Who knows what I'll try next.

Back to the point. I learned that there is no wall at 20 miles. Actually, I usually hit somewhat of a wall at 16 miles, but I have learned that it goes away at 20. Then I feel bad again at 30-35 miles, and then things get better again. In a 100 mile race there are many times where you hit a wall. Its mostly mental. I know that now. Its the point where things get hard. If you know that things will get hard you learn how to manage them. You expect it. You prepare for it. You also learn that after things get hard they get easier again. I think that is exactly like life. Things get hard. When they are hard don't lose site of the fact that things get easy again. They always have, haven't they? Why would this time be any different? Learning to wait things out and have the faith that things always get good again is something that running long distances has taught me. It take a lot of focus away from the tough times when you know that good times are coming.

Running has also taught me that listening to others sometimes creates walls in your mind that don't have to be there. Have faith in the fact that you can create whatever you believe in. Walls are there to be broken through and there are great things on the other side of them.

"great things on the other side" Amen, brotha!