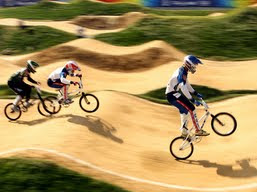 Today is part 13 of a 30 day commitment. To read about how I am blogging to change my life please read here first.

When I was 12 or 13 I lived for BMX bike riding. I lived on my bike. I raced every weekend that I could and I spent all my free time riding my bike. It was the only thing that I cared about. I read every issue of BMX Plus magazine 100 times from cover to cover. This pattern would repeat itself in my life with every new sport I discovered and still does to this day.

I read an article titled "Training your brain with Self-Hypnosis" in the April 1984 edition of BMX action. It talked about how the top racers could close their eyes and start a stopwatch. They could picture racing on a particular racetrack so clearly that they could ride the entire track in their mind and stop the stopwatch when they were done. The time would be within seconds of their actual time at the track.

It talked about how it was a mental exercise that had to be practiced. The same way that you would actually practice getting your body ready. It stated that if you were going through the mental exercise and your minds eye pictured somebody passing you you were to stop and start over from the drop of the gate. The idea was to go through the entire track without anybody getting in front of you. This would train your head to picture winning.

I remember how hard it was to do. The first time I did it I kept picturing the "fast guys" getting in front of me in the places that they had beat me the past week. I had to start over and over in my head before I got to the point where I could beat them start to finish in my head. It was a tough mental exercise that required a ton of patience. But I wanted to win so bad it was easy to stick with it. It was exciting to think that I might have discovered a secret weapon. I guess that I have always been open to new ideas.

The first week that I was really dedicated to it was amazing. I raced that Sunday and the "fast guy" got in front of me after a couple of turns. But this time it was totally different. In my head I said, "no way buddy, I've already got you beat". I passed him because in my head it wasn't his race to win, it was mine. My belief in myself allowed me to put the extra energy into winning the race.

I didn't lose that much after that, but it took many years before I realized what I had been doing. The called it self-hypnosis, but it really was getting a clear vision of what I wanted and believing that I could have it. I think that this related pretty clearly to last nights post on the Law of Attraction. I combined a powerful want with strong emotion and got what I asked for.

I am back at that point where I am realizing that if I want something it wont just happen on its own. I have to train. But this is mental training. It is not easy and takes a dedicated effort to do. The more you train the more the goal becomes obtainable. It is exactly the same thing as running your first marathon. It requires commitment and training. If you think that you'll just line up at your first marathon without training you will be headed for some real suffering. The better prepared you are the easier it is.
Posted by Nathan Sanel at 9:36 PM

Mental training....excellent Nathan!! A lot of people don't get it. As you say, it's as important as physical training for any goal you want to accomplish. Way too many people think there is an easy way and thats why they are in the same spot today as they were 5 years ago, 10 years ago, etc...