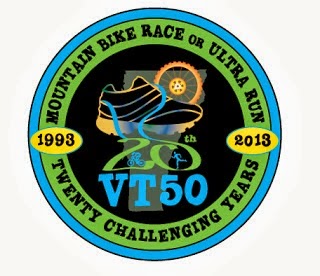 I can't believe that I haven't written anything here since July!  Ever since the Vermont 100 I have been in a pretty serious running funk.  Truth be told I've actually been in an overall funk.  There are a lot of things going on in my life, like buying a new building for my shop and all the headaches and worry that go with getting it ready to relocate.  My training has suffered, as I just haven't been motivated to run for a long time.  It seems like every time I planned on running long, I just didn't have the mental patience to stay out there for very long.

As a result, I ran only one 20 mile long run in the time between VT100 and VT50! Usually in heaving training I do at least 2 20+ milers a week, sometimes 3.  Most of my weeks were in the 45 mile range, down from my average of about 70.  I attempted to run the Hampshire 100k on August 18th, but dropped after only 10 miles.  I just didn't want to be out there that long.  I also entered the Jay Peak 50k on Sept 1, but the option to drop down to the 25k after one loop did me in and I succumbed to the fact that I could still get a finishers place by doing so.  Although I came in 7th place, it didn't feel like a success since I once again didn't seem to be able to go long.

These runs and races were supposed to be training for my fall goal of breaking 8 hours at the Vermont 50.  But the week before the race I decided that it might be smart to drop down to the 50k distance and try to have a good race rather than suffer an inevitable DNF.

I felt pretty good about the decision.  Since the 50k runners start at 8am there was also the bonus of it being warmer at the start than it normally is for the 50 miler, which starts at 6:45.  Even though it was a little chilly, the forcast called for mid 70's and perfect weather.  Although I was still a bit chilly in my singlet I knew I would quickly warm up.  I was amazed at how many runners were wearing warm weather gear and thought about how much they were going to regret wearing so much in just a short while. 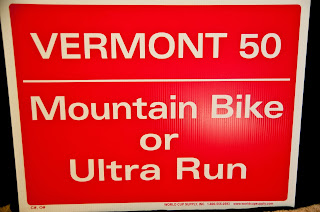 At the start I ran into George Lapierre, whom I hadn't seen in quite a while.  It was really nice catching up with him and we both started from the front.  I didn't realize that it was his first 50k, and thought that he would be strong competition for me.  He is an incredible biker and he has done well in the few shorter running races he has done.

As we took off two runners immediately took off like they were doing a 5k.  One of them had two water bottles in the back pockets of his shorts and I was a little perplexed as to what he was doing.  Geo and I made a few comments to each other about his performance and settled into a nice easy pace.  When we got to the first hill we were in the top 10 or so and he said, "this is were everybody passes me".  I didn't expect that, and kept my very easy pace going up the hill.  That was the last I saw of him until the finish line.

I did not know any of the runners in front of me, but I started passing people on that first hill.  My plan was to take it super easy for the first half and then see how badly my endurance had suffered and hang on my best for a solid finish.  Since I haven't raced a 50k in years, my 50k PR was a pretty soft 4:50.  I was hoping that if I felt good I might be able to break it if I had a good day.  By mile 5 or 6 I knew I was going to have a good day.  The hills seemed easier than I remembered and there was almost nothing that I needed to walk.

The fall foliage was in full bloom and it was incredible, keeping my mind occupied as the miles ticked away.  I decided to use a similar fueling strategy that had worked so well for me at the 100.  I was going to rely on Hammer Sustained energy for my primary source, supplementing it with Hammer gels if I need extra energy.  I had one drop bag at mile 12.9 which contained a few gels and a new bag of SE power to make a new bottle.

At 2 hours into the race my hamstrings started to tighten up.  I decided to take 2 advil.  I am fully aware of the danger of using Nsaids at races, but I've been doing so since I started races and have never suffered any ill effects.  The one rule I have about using them is that I have to make sure I'm well hydrated.  If I am showing any signs of dehydration I will not use them as the danger drastically increases.  Since I was on top of my hydration I decided to go for it.

A half an hour later I felt really good as the advil had kicked in.  I was enjoying the beautiful scenery and I was very grateful to be outside, running well and in a very good mood.  Of course that influenced my pace positively.  Somewhere in the 20 mile range a few people passed me.  I chatted with one of them for a bit and he told me that it was his first 50k and that he was feeling good so far.  He told me that his Marathon PR was 3:15 (the same as mine) but he had been training hard and was in 3 hour shape.  He sure looked it as he pulled effortlessly away from me on a flat section of dirt road.

Sometimes getting passed in a race like this gets inside of my head.  But today it didn't bother me.  I kept repeating to "run my own race" in my head and not worry about anybody else.  I've done to many of these things to know that the majority of people blow up in the late stages.  Just focusing on how I was feeling, which was great, helped me enjoy being out there.    At this time I was in the top ten, but not sure exactly what place.  I ran alone for quite a while and enjoyed the solitude that came with being in the woods on a perfect fall day.  Run Happy crossed my mind many times.

Somewhere around mile 22-23 I came upon the guy with the bottles in his rear pocket.  He said "nice job" and told me that I was now in 5th place overall, with 2 girls in front of me.  Being a math wiz, I realized that I was now in a podium position (3rd man for those of you who didn't figure that out).  This really lit a fire under my ass.  I was not expecting to do so well and since I felt good I decided that my goal for the day was to not let anybody else pass me.  I really wanted that 3rd!

I knew that with about 10 miles to go that it was premature to place myself on the podium.  Anything can, and usually does, happen with an endurance race.  But I HAD to try.  So I ran with purpose.  I ran every single hill from that point on and pushed hard.  Somewhere in this time frame I passed the early lead woman, who was clearly struggling.  The eventual woman's leader had come by me earlier.  We chatted a bit and she told me that last year she had finished in the 5 hour range and all she wanted to do was beat that time.  She looked fresh and was running great.  Now that I had passed one of the women I was in 4th overall.

The last 5 or 6 miles I kept looking behind me to see if anybody was coming, but nobody ever came into sight.  I spend quite a bit of time with a group of bikers who were very encouraging.  I would pass them going up the hills and then they would come back by me on the downhills.  Everytime I would go by them they would tell me that I was killing it, or that I was an animal, etc.  It was a lot of fun and kept me motivated to run the hills.

I was looking forward to getting to the last aid station, which I thought was less than two miles from the finish.  When I got there I was out of my Sustained Energy so I asked them if they had any gels.  Somehow I thought that the aid stations were supposed to have Hammer gels, like in the years past, but they didn't.  Luckily somebody who was at the aid station asked me what I needed and I said I just need one gel to get to the finish line.  He said "here" and handed me a berry Hammer gel.  Perfect!!  I wish I knew who it was so I could thank them, it really helped me.

As it turned out, the aid station was still 3 miles from the finish, so I really had to push if I was going to get that PR.  I believe that my watch said I was about 4:10 into it and there are some good hills in that last section.  I put the bit between my teeth and went for it.  About a mile from the end I started to cramp and had to fumble to get two electrolyte pills out of a little baggie I had, while trying to hammer as fast as I could.  I was just praying that the cramping would hold off just a little longer!

I flew down the last downhill chute to the finish line and crossed the line in 4:38:45 for third place and a shiny new PR.  I was so relieved to not only have finished, but to have placed and ran well.    I spend my of the rest of the day hanging out and watching friends finish.  There were some amazing performances on this picture perfect day.

Great job. Hey just curious what shoes did you wear for this one and how did they do?

I forgot to put that in the report! I wore the Pearl Izumi Trail N1's. They were excellent! No blisters and enough protection and cushioning.