Yesterday I tested my legs and lungs for the first race of the year, the Connecticut Traprock 50k.  This is only the second year for the race.  Last year it drew about 30 entrants, this year about 150.  I decided that rather than driving the three hours in the morning before the race I would stay at a hotel and enjoy the late race start of 8:30am.  To make the most of the weekend I left Friday afternoon to go to the Boston Marathon expo.  I have heard that it is the biggest and best running expo in the world.  I was hoping to pick up lots of schwag and talk running to like minded folks.

I picked up my friend Ron at his office in Manchester and we took the hour drive to the expo.  We fumbled our way in the city a bit and finally found a parking lot.  I promised Ron that there was no way in hell I was ever going to find my car again.  Luckily I wrote down the location of where I parked and we found our way into the expo hall.  We ate a great lunch at a place that served every variation of salads and wraps and headed into the expo right as it opened at 2.

While Ron picked up his bib for Mondays marathon, I made my way over to the Altra booth to finally meet Brian, one of the owners. 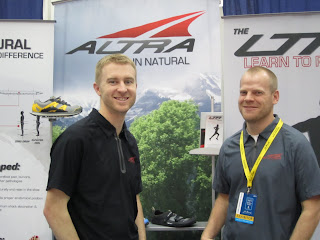 I was super excited to get my shoes, the Altra Instincts.  It turned out that one of the boxes hadn't been delivered to the expo.  Of course, it was the box with my sized shoes.  Luckily Ron is picking them up for me and bringing them over today.  I tried on a few pairs and had a great time chatting with Brian.  Its very cool to see the owner of a shoe company also be an Ultra runner.  We talked about The Bear 100 since he has run it before. He told me enough about the course to scare me.

Ron headed back to NH with another friend and I headed down to Ct to stay at the hotel.  I was psyched that I was staying at the Hyatt Summerfield Suites.  For $98 I got a huge room with a full kitchen and little living room.  I ate some brown rice with avocado sliced over it, had a banana and for desert had a piece of wholegrain bread with almond butter.  It was so nice being able to eat the way I like and not having to eat out where I can't find any food options.  I was in bed by 10 and slept great.

In the morning I made my way over to the parking lot of the Penwood State park and found the main parking lot already full.  I parked across the street and headed over with my drop bag full of race fuel and extra supplies.  They were serving Gatorade at the aid stations which are located approximately every 3 miles on the course so I was set with fluids.  While I was standing in the registration line I started to realize how cold it was.  I was shivering badly even though I had an extra sweatshirt on.  I chatted a bit with Brian Rusiecki, a perennial top runner and super nice guy.  The line moved pretty slowly but soon enough I was registered and ready to go.  My race number was 69....that means that they could read my number even if I was upside down on the course...After the race briefing from the RD, who told us "If you get lost on this course you should take up road running" we were off right on time.  The course is a rocky, hilly route that has about 2000ft of elevation gain/loss per loop.  Each loop is 10.5 - 11 miles (they never really say exactly how long it is) and the 50k racers do it three times. The race starts by going a couple hundred feet then immediately heads strait up a steep hill.

There is a lot of climbing early on in the race.  Just a few miles in you go up a section called the "Stairway to Heaven.  It's steep!!  Luckily it doesn't last to long.

When you get to the top of the Stairway it levels off for a few feet and then goes up again! 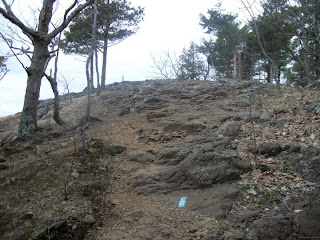 I had decided to wear my Inov-8 flite 230 shoes.  I was not sure if I was making the right choice since the course if pretty rocky and rooty and these shoes have no rock protection and not much traction.  They turned out to be excellent for everything except rocky descents where I had to be careful to not stub my toes.  For the first loop I ran with my friend Adam Wilcox.  Neither of us planned to run together, but we were just on the same pace.  It was great running with him and I was chatting away, doing my best to annoy him.  He was much stronger than me on the downhills and was running with reckless abandon while I was being much more careful.  At that point I was stronger than him on the uphills so he would take off on my on the downhills and I would catch him on the uphills.  On the flats we were running the same pace.  We finished the first loop in 1 hour 30 minutes and I was right on track for my race pace goal.  I was hoping to finish around 4:30 but never seeing the course before I wasn't sure if that was a reasonable goal.

At one point, I think it was the second loop, Adam took off flying on a downhill.  I was actually thinking "holy shit, that's ballsy in this section" since it was so rocky.  I lost sight of him and then a saw him off course clutching his shin.  He had wiped out and slammed his shin against a rock.  He was wincing in pain I was worried that he really hurt himself.  He said he was OK and I took off.

It is tough being in these situations.  Adam is a friend and even though I was pumped up to race, it is more important to me to make sure he wasn't hurt.  The course has many points where you go past other racers since it is an out and back with a short lollipop loop in the middle.  I was happy so see Adam a little bit later and he said he was OK.  As the race progressed I realized that I was in the top ten.  I had really tried to not go out to hard but I was starting to feel it in my quads and I was concerned that I had done what I usually do.  I always seem to go to hard at the beginning of my races.  Its not that I'm going balls out, its just that when I feel good I run my normal pace forgetting that I need to save something for later.

I started really running low on energy near the end of the second loop.  I was eating very well, but I might not have been drinking enough.  Instead of using my handheld bottle I used my waist bottle pack.  Since the bottle wasn't in my hand I don't think I was as aware of my need to drink.  For the first loop I didn't even drink an entire 20 ounce bottle.  I started taking endurolite caps since my quads were already starting to feel achy.  I was hoping that it wouldn't lead to cramping.

One section of the loop is a 1.5 mile paved road and near the end of the road is a picnic bench.  Right before the bench I started feeling a pinch on the bottom of my left foot.  It felt like the beginning of a blister and I couldn't believe it.  It wasn't wet and there was no reason that I should have any blisters.  I realized that I had a rock in my shoe and I had a seat on the bench and emptied both my shoes.  Much better!

On my way out for the third and final loop I really started to feel bad.  I was passed by two people and that messed with my mind.  My quads were now feeling thrashed and I was eating more salt tabs then I ever have trying to prevent them from cramping.   I also really focused on my drinking to help.  At one point the strangest thing happened.  I was all alone on the course, feeling low on my energy, and I felt like crying.  I wasn't upset about anything, I wasn't going to stop or give up, but I was just a ball of emotion.  I have never, ever felt like this in a race before.  It is very hard to explain.  I think it was purely physical. 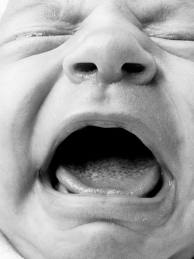 Luckily it didn't last long and I really focused on just keeping moving.  I started counting the people in front of me and realized that I was in 10th place.  It was very helpful.  How could I be upset when I was in the top 10?  My mission then became to not lose any spots.  I wanted badly to finish in the top ten, regardless of what my time was.  On the lollipop loop I was able to see how far behind me 11th place was.  he was about 1/2 a mile back and he looked really strong.  It provided great incentive to keep moving.  My quads were cramping on every uphill but I felt good on the flats.  I stubbed my right bid toe three or four times on that last loop as I wasn't picking up my feet as well as I should have been.

With less than a mile to go I put my nose to the grindstone.  I had no idea if the guy behind me was catching me but I knew I was going to give it my all.  On the last climb I spotted somebody in front of me and I decided to do everything to catch him.  At the top of the hill I blew by him and now I only had the last downhill to go.  I ran as fast as I could hoping not to wipe out.  I forgot to look at the clock as I finished but stopped my watch a few seconds later and it said 4:50.  I confirmed that I finished in 9th place with some friends but I still have not seen the official results.  Adam ended up catching our friend Ryan really close to the end and finished in 5th place!  He's having an incredible year and I'm happy for him.

Its strange, but I feel sort of disappointed with my finish.  I shouldn't be, but I thought that my endurance was better.  I really thought that I should have been able to keep up my early pace for the entire race.  Coach Jack doesn't seem to believe in tapers, he calls them "mini tapers".  I ended up running 86 miles last week and perhaps that had some impact.  Regardless, I have to put it in perspective.  This race was only supposed to be a fitness check.  It wasn't an "A Goal" race.  I am very happy to have finished in 9th.  My challenge this year is to finish a bunch of hundred mile races so I need to work on my endurance and strength, not as much my speed in shorter races.  For today, I'm happy to be healthy and to have finished well in my first race of the year.