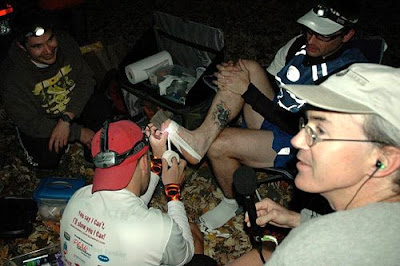 When I ask who I am, I come up with many answers. I am a Husband, a Dad, a Boss, a Runner, a Snowboarder, a Motorcyclist, an Entrepreneur. The harder question to answer is, who do I want to be? The problem is that I believe that I can do anything. Actually, I believe that anybody can do anything that they want to do if they decide to do it. I have actually had arguments with family members who don’t believe it. For them, there are always scenarios that will limit somebody’s potential. I tend to be an optimist. I don’t think that I am better than anybody else, but I believe that I can do anything in the world that I want to do. Some people feel that is arrogance. The thing that they don’t know is that I feel the same way about everybody.

Somehow I know that what I really want is to inspire people. I don’t want to inspire them to be like me or do the things that I do. I think that inspire might be the wrong word. I want to help people realize that the biggest obstacle in their life is probably themselves. It has to start with an actual belief that you can do it (anything you decide on). When I tell people that I ran 100 miles in less than 24 hours the almost universal answer is “I could never do that”. And that is exactly the reason why they never will. Running 100 miles doesn’t take any special talent. It starts with a desire, then a belief, then an unwavering dedication to making it happen. The desire can be there but without a belief that you can actually do it, you wont. Guaranteed.

I seem to see potential in people around me that they don’t see in themselves. The other day I was talking to a man in my shop that was looking at bikes with his boss. His boss is a successful business person whom he obviously looked up to. He told me that he (his boss) owned a big piece of property and that he was in his 70’s and still going strong. He was bragging to me about how successful he was. He obviously admired him a great deal. I asked him what his position was and he said “Oh, I’m just his maintenance guy” like he was embarrassed or somehow his life wasn’t as important as his boss. I had to do everything in my power not to say to him, “Don’t you ever say that you’re ONLY his maintenance guy”. I can’t stand it when people do that to themselves.

When I started National Powersports I quickly realized that it had huge potential. It wasn’t long before I had this mental image of what the business looked like when it was finished. I didn’t dream of your ordinary motorcycle shop. I pictured a huge warehouse like Home Depot filled with motorcycles. I pictured where the cruisers would go. I pictured where the sportbikes would go. I pictured how the salespeoples desks would be positioned. I pictured how the signage would look. I pictured how the new bikes waiting to be worked on would be laid out. I pictured how the lighting would be set up. The type of detail that I allowed myself to picture formed exactly that, a picture. This was when I was selling bikes out of my garage. Fast forward to my current shop, where many of those images have been realized. I hear many times from people who have done business with me for years, “I bet you never pictured this when you started?” Well, actually I did. I don’t think that I would have grown as quickly if I had not. All I’m doing is following the image that I have painted in my head. Its just connect the dots!

The first step in changing your life is to allow yourself to dream. Every one of us can picture ourselves doing something special with our lives. But we seem to have lost that ability that we had as a kid that allowed us to believe that we can actually do it. Tonight when you go to bed, fantasize about something great, and then picture it in your mind as if it was real. Let go of all the reasons that you can’t have what you want and immerse yourself into the feeling of having what you want. Believe that you can have it. Don’t worry about the how, just believe that you can.

Great things happen once you change “I could never” to “I can”.