Fuck it, I'm voting from my heart.

I've decided what I'm going to do on Tuesday.  I'm not looking for a debate.  I'm simply sharing my opinion on my blog.  For those of you who know me and respect me I hope that you read and consider this point of view.  I'm done with the old adage of never talking publicly about Religion or Politics. We need to.


During the primaries I felt an urgency for change and an optimism in Bernie.  I had some hope.  I had some hope that I wasn't the only one who can't stand seeing other people suffer and hurt.  I had some hope that strong values, solid ethics and a spirit of independence was at the core of being an American.  I had some hope that the golden rule, "Do unto others as you would have done unto you" was still the gold standard for how to live your life, no matter what religion you follow.  It seemed like we finally found a leader that would fight hard for those same principles.  A man who had been fighting that fight his entire career.  Bernie.  And it gave me huge hope to see America responding to his message.

His defeat as the Democratic candidate was and is disheartening. If I simply rely on my instincts, it seemed obvious that there was an event that immediately changed his direction and forced him to endorse Hillary.  Something just doesn't make sense.  And today new emails released show that he was "leveraged" to endorse Hillary.  Either way, it left a serious void and a lot of concern in the heart of this supporter.  I'm inspired by his sincerity and his genuine concern for fellow man.  I can't imagine anyone else as President now.

These last two weeks leading up to the election have been terrible. I cannot vote for either one. I've spent much more time thinking about my vote than in any other election.  I remember in 2008 feeling excited about Obama and his message.  It felt important to vote.  But it didn't have the same urgency that it does now.  We have more information now.  The question of voting for the lesser of two evils just doesn't make sense. You are still voting for evil.  That's not how this is supposed to work. I also have serious concerns with both Stein and Johnson, but I'll take either over the Red and Blue choices.

We've pulled back the curtain on the all mighty Oz.  We've been happily singing along in Munchkin land while our freedoms and rights were being stripped away under our noses. We've allowed ourselves to forget what we know to be true.  Truth has been replaced by fear.  And we've somehow become blind to our captures motives, even though they are repetitive and obvious.  The question that most people are asking right now, "Who will be the lesser evil, HRC or DT?", is born completely out of fear.  Voting for one just because you fear the other makes no sense.  There on the same side. We should be voting on who we want as leaders, not who will think will have the most hesitation before they push the Nuclear War button.  "Don't throw away your vote, you'll be the reason that XXXX wins!!" Scream both sides.  Yet all of us in the middle, who still have a shred of common sense, are sitting here going WTF?? How can we possibly be in this situation?  It doesn't matter how we got here.  It's what we have to do about it from here.  We're at a tipping point, so it's very important that were paying attention.

If you have your eyes even half open it's not to much of a stretch to believe that most of this election is completely out of our control.  It's a rigged show.  It doesn't matter who you vote for.  Just follow the money backwards.  My prediction is that Hillary Clinton will "easily" win in a landslide.   The  fact that I have fear of sharing my honest opinion tells me that it's time to give serious contemplation about the country we currently live in.

So I'm going to be an American in the most true spirit that I know.  I'm voting for who I want to be the next President of our country.  I'm writing in Bernie.  And no, I'm not wasting my vote, I'm exercising my right as an American to voice my opinion. That's what it means to be an American at its core.

I want to see his name splashed all over corporate media, no matter how hard they try to manipulate it.  I want to send a message to the greedy fucks who control this country.  We see whats going on.  We are sick of our Earth and wallets being raped.  We will no longer send our children off to die in your useless wars. Your killing our race in the name of money.  There is no more time left.  A lot of us feel it. Think of how huge the crowds were at Bernies conventions.  We have real power. Don't give up now.  Don't let evil win. There is no lessor evil, it's the same. Please follow your heart, not your fear.  Don't hate hate, love love.  Please... 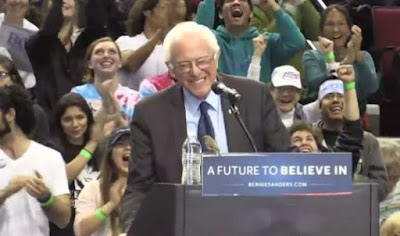