At the end of my last post I listed a few shoes that I need to review and asked if anybody had a preference for which I should do first.  It was a tie between the Altra Olympus and the New Balance MT110V2.  So here is the first of the two.

When I first heard about the Olympus I was very excited.  Way back at the beginning of Altras incredible ride to popularity (3 or so years ago) I fell in love with the Altra Instinct.  I wore it for road and trail ultras, including 3 different 100 milers.  As much as I loved it, I wished that it had more cushioning and better traction.  So much so that I even cut the sole of a pair of Hoka Mafates and bonded it to a Instinct upper.


When I heard that Altra was coming out with a Zero drop, maximum cushioning shoe I was psyched.  What I was hoping for was a Hoka type ride with an upper that had the typical Altra features of a large toe box and comfy upper.  Speaking of Hoka, there is no way to do this review (in my eyes) without having some sort of comparison between the two.  Most trail runners I know have at least one pair of Hokas, even if they primarily run in minimal or traditional shoes. 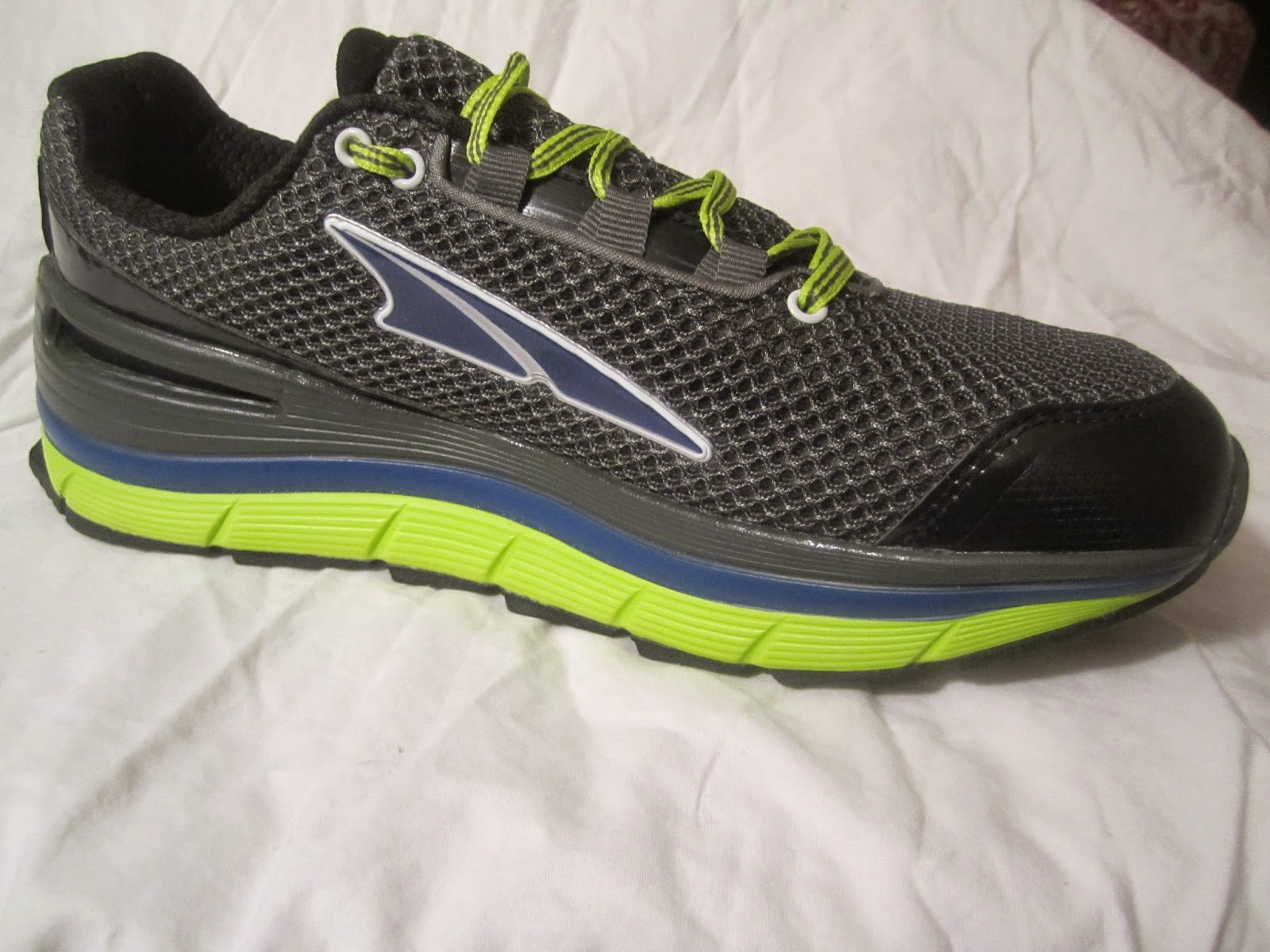 When I slipped them on for the first time I was really pleased with the fit of the upper.  Then when I took my first steps I was immediately struck by the odd gait I had walking on our wood floors.  It was as if I was standing on a flat sole that canted forward when I walked. I have worn many rockered shoes but they have always felt as if they exaggerated the natural running stride.  These felt like they impeded it.


My first run was on the pavement.  I hated them.  It felt like the radical ramp angle had my toes hanging off the edge of a diving board and the stride was just clunky.  The level of cushioning was great.  Not Hoka Bondi soft, but similar to the Stinson Evo.  Also similar to the Hoka Rapa Nuis, but with more height.


I was pretty bummed and put them in the closet.  I wrote Golden (the founder of Altra) asking if I was the only one who was fixated on the ramp angle.  I asked because I had already read many reviews and people seemed to love the shoe and was starting to see it on peoples feet at races.  He said that no, I wasn't the only one, but many folks were saying that it was much minimized when running off road.  He also said that for the next version they will be working on a more natural transition to toe off.


Since I loved the fit, I wore them a few times casually.  My heel bruise does better wearing maximal cushioning shoes.  I didn't run again in them for a while.  Then I tried them on a short 8 mile run on the trails and though that he was right.  The ramp angle wasn't nearly as noticeable.   But with many shoes to test they sort of fell out of my rotation.  With it being the top pick for a review, I decided I better run some more miles in them.


So Thursday I took them out for a 12 mile run all trails.  I swear they seem like they are breaking in.  The run felt really good and I enjoyed wearing them.  Then on Sunday I took them to the White Mountains.


Since they fit just a tad tight on my right foot, I was worried about using them on the steep descents, but it turns out that wasn't a problem.  As a matter of fact, they were excellent.  I ran 21 miles of very steep, rocky, wet, muddy, mossy, rooty....ok you get it.  With 8000 ft of elevation gain/loss it was a great test.


The level of cushioning is so appreciated when running/hiking on trails like these. As is the super comfortable fit and wide toe box.  But the upper can be laced very snugly and they keep your foot in place.  Which prevents your toes from being smashed against the front, which is something I hate.  What's not as appreciated is the traction.  It has somewhat grippy rubber, but not awesome.  And the road based tread doesn't work in mud at all.  The good news is the fit and comfort.  I got zero hot spots or blisters and I just love how comfy they are.  Although I haven't submerged them, they seemed to dry out pretty quickly from the water/mud I did get on them. 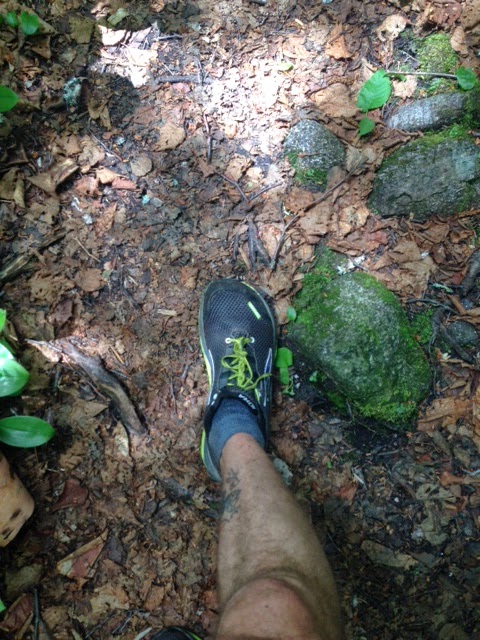 It should be noted that I saw these shoes on the feet of several competitors at the Peak 200 race 3 weeks ago.  And two of them wearing them finished!  Also it's worth noting that my friend Larisa Dannis ran a 2:44 Boston Marathon in them, finishing first non-elite US woman!

The foam seems to be getting a bit softer and breaking down a bit.  This is a really good thing.  The stiff rigid feel I encountered at first seems to be going away.  Sometimes you actually do get another chance to make a first impression.  I still will be excited to see Altra fix the abrupt ramp angle, but in the meantime I am going to put a lot more mountain miles on these puppies.

Thanks for the review! I just tested my Olympus at the Mt. Greylock half on Sunday. I have a question: I'm running VT next month and had planned to use the Olympus for the last 30 miles (and my peregrines for the first 70). Should I consider starting out in the Olympus? Thanks!

Great review and thanks for taking the time to write it up. Seems we had the same experience with the shoe as I started to like it a lot more with time as well.

Tom,
I wish I could answer that for you. But, last year at VT I used Pure Grits for the first 20 or so, then changed into Altra Torins, which were great! The last 18 were done in my Hoka Bondi's. If you like how the Altra's feel I don't see any reason to not wear them for the entire race. Good luck at VT!!

Thanks Nate. The more I run in the Olympus, the more they seem like the shoe for VT.

Hi Nick,
In both I wear my normal size, 10.5. For a wider range of runs I prefer the Rapa Nui. But, the Olympus has a nicer toebox and more cushioning so it's my pick for the tough, steep and rocky stuff. Good luck at VT, I wish I was going to be there this year!

Hi, Biker Nate.
A friend recommended I contact you with a shoe question: I have bunions and run ultramarathons. For some reason I continue to put holes through the uppers of my running shoes--seemingly from the friction of my big toes. Often this happens within the first 100 miles with which I have the shoes . . . I've done this with 4 pairs of Altras recently. I need to find something that will be more durable. Looking for: wide toe box, zero drop, and very sturdy upper. Pairs for trails and pairs for roads. Suggestions?

Mr. B,
I really don't. Based on what you've described I would have recommended Altra. Ever consider getting the bunions removed?

Have you tried the paradigm or torin 1.5? What would you recommend for me. I am working towards my first ultra, a 100k on crushed limestone trail so not technical.

I've run in both. The Torin 1.5 is one of my all time favorites. It has a nice balance of cushioning and control. It is not a pillowy soft shoe, but rather has a nice sort of "soft give" to it. The Paradigm is a super cushioned shoe that is pillow soft and has a fantastic upper. I should have a review of it up in a few weeks on runblogger.

Thanks for the review. You mentioned they were a
"tad tight" and run a little on the small side. Did this seem less noticeable as you put more miles on them? Did you try running without the insert?

I just received mine and they seem just a little tight. Mostly on one foot. Since I cannot size up 1/2 size (I ordered a 13), I'm debating whether to give them a try or exchange for another shoe.

Rod,
They were never so tight that I had to remove the sock liner. And the slight tightness never bothered my toes so I've just been running in them. Perhaps you can replace the sock liner with a thinner one? That might be enough to do the trick.