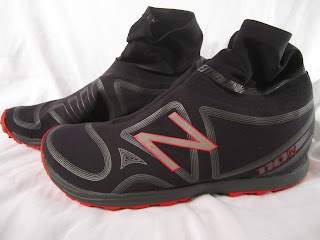 About a year ago, when reading Anton Krupicka's blog I noticed he was wearing some funky blue shoes.  Thinking that they were the next version of the MT110 I zoomed into the picture and noticed that it appeared to just be a booty of some sort.  We now know that it was both. It was a MT110 with a built in booty for winter conditions.  New Balance recently introduced that shoe, the 110 Boot, also known as the MT110WR.

Recently New Balance was kind enough to send me a pair to test and write about.  (Disclosure:  These shoes were a media sample provided free of charge).  Since todays weather was so incredibly miserable I figured it would be the perfect time to give them a proper test.


Readers of my blog know of my love affair with the original MT110's.  You can read my previous reviews here and here.  I also named it one of my top 5 favorite shoes of 2012.  Its not surprise that the 110 boot felt great from the moment I put them on.  I do need to note that for some strange reason they ran a little roomier than the two other pairs I have had.  All in size 11 (I normally wear 10.5 in most shoes).


Pulling back the booty reveals a bright yellow MT110 with no graphics.  There is some slight "puckering" of the fabric, but nothing that I could feel once the shoe was on.  The bootie zips up tight and was not uncomfortable on my bare skin.

As I headed out the door it was raining hard and around 40 degrees.  The snow from the night before was heavy with water from the rain and the wind was whipping hard.

I decided to wear shorts because I knew pants would be soaked in minutes.  After 1/2 a mile I realized that I had made a mistake.  My thighs were freezing and stinging.  I decided to get to the trail opening another 1/2 a mile a way and hope that there would be less wind.  After getting into the woods and warming up it wasn't an issue anymore. 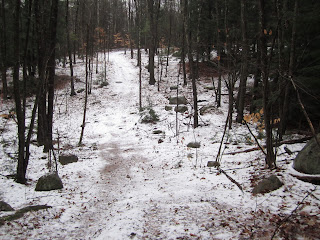 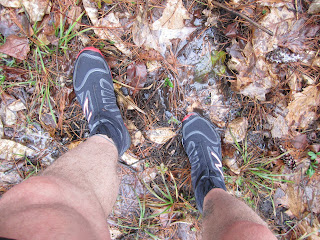 The trails surface was a mix of very slushy snow and puddles, with occasional clear trail.  In any other shoe my feet would have been soaked within 30 seconds.  The shoes ran great and the booty was very waterproof.  I ran through everything that I could without any concern and my feet felt warm and dry.  After running for about an hour in those conditions I was soaked to the bone. But my feet felt so good I was convinced that I would find my socks totally dry.  They weren't, but since my feet were nice and warm and there was no waterlogging like normal shoes, they felt like they were.


I made a quick video to show the type of conditions that I was running in.  I'm still amazed that my feet were not waterlogged.  The most interesting thing about the video is that I seem to sniff constantly when it is cold and miserable.  I had no idea!

Besides the booty, the shoe runs exactly like the MT110.  Yes, the increased lateral edge is still there, although minor and it has never bothered me.  The bottom line is that if you love the MT110 and you have winter weather, you must get a pair.  In wet snowy conditions I will have a hard time putting anything else on my feet this winter. 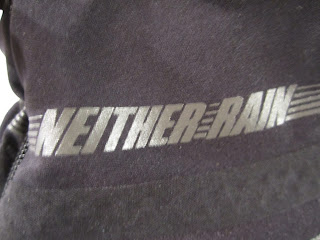 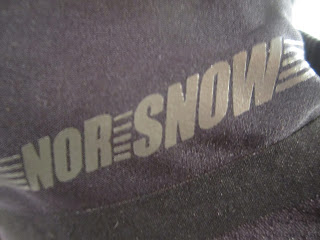 Neither Rain, Nor Snow will stop you from now on....not with these shoes.
Posted by Nathan Sanel at 6:33 PM

Hey Nate. How is your foot feeling? Do you still have pf? Also when is your next big race? Are you running leadville this year?
Good luck with your running
Greg

Hi Greg,
My foot is doing much better since I have been running less miles. Hopefully this little post season break will let it heal enough that it won't be a problem this coming year. I'm not signed up for Leadville, but I am signed up for MMT100 and Vermont 100. Best of luck for you as well!

I could use a pair of these for a 22 mile snow run I'm doing in February. No snowshoes allowed. Called the Twin Mountain Trudge in Wyoming..

With the standard 110s I had a problem with the seam of the shoe in front of the laces causing significant fiction at the base of my big toes. I have a wide foot which may be part of the problem... but if you feel inside the shoe in front of the laces, is there a similar bulge where this seam is? It's hard to tell based on pictures if this part of the shoe design is the same as the original 110.

Where are you located? very beautiful area!