Sunday marked the kickoff of my racing season with the Traprock 50k in Bloomfield CT.  I was really excited to test my early season lungs and legs.  I ran this race last year and finished 9th place.  Last year the steep, rocky terrain handed me my ass as I had been running mostly flat snowmobile trails.  This year I have been training very differently.  Rather than putting in a ton of miles I have been working on running hills every day.  This started in January and I have felt myself getting stronger and stronger.  I also haven't felt as worn out because I haven't been running as many runs over 20 miles. I knew that I was strong, but I wasn't sure if I had affected my endurance by cutting back on my long runs.  I got my answer on race day. 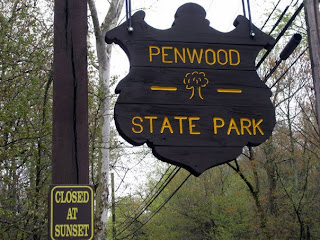 I got to the Penwood State Park at 7:30 just in time to pick up my packet.  The day still had a chill in the air, but the forecast called for warm weather in the afternoon.  I was wearing arm sleeves but decided to take them off at the last minute, which was a good call.

I had decided to use Vitargo as my fuel and had prepared three 28oz bottles for the day.  The course is a 10.5 or 11 mile loop, depending on whom you ask, and I was able to leave a little cooler with my bottles and supplies at the turn around.  This is a great setup if you don't have a crew.  I discovered Vitargo on Dave Mackeys blog and had experimented with it on several long runs.  It is a super long chain carbohydrate that allows you to ingest way more calories per hour than normal without any gastric distress.  I had prepared the Vitargo in a super concentrated manner, sort of a cross between a drink and a gel.  Each bottle had almost 900 calories and I planned on drinking one per loop, or every 1 1/2 to 1/3/4 hour.

After a long race meeting and a neat tribute to the recently deceased Micah True on cello, we were off.

When the "Go" command was given I found myself in the lead pack with Ben Nephew, Ryan Welts, and Jack Pilla.  The race starts with a short (couple hundred feet) of road and then veers left and strait up a rooty rocky hill.  I felt very strong and had decided that rather than hang back like I usually do I was going to go for it today.

Ben was quickly gone but I found that Ryan, Jack and I were running the same pace.  I actually jumped to the lead of our group for a while and waited for the other guys to blow by me, but it didn't happen until I decided to pull back a bit and let my heart slow.  Ryan jumped in front of me and I stayed with him for a couple miles.  When we got to the "Stairway to Heaven" section, a very steep rocky section, I was right behind him.  I grabbed his ass as we started going up the stairs as a joke.  He turned around and said, "Hey man, go right ahead if you want to get in front".  He didn't seem happy with my kidding around.  I told him that I didn't plan on blowing myself up and he was going plenty fast enough.

The truth was, I was already headed down the road of blowing myself up.

Ryan began to gradually pull away, but not by much.  Jack decided that he wanted to catch up with Ryan and passed me.  I kept both of them in site on the paved road section and could see Jack pull away.  As I ran down the hill at the end of the first loop I was able to see that I was only minutes behind them.  I quickly swapped bottles, took off my shirt and headed back up the hill.  My first loop time was 1:23:14, way faster than my 1:30 goal.   Another runner had caught up to me right near the end of the first loop and I pulled away from him on the hills.  At the turn around I could see that he was less than a minute behind.  I needed to keep hammering! 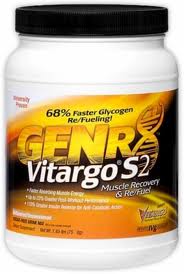 As I took my first swig of the Vitargo in the new bottle I realized that there were some hard chunks in it, sort of like little pieces of plastic.  When you mix this stuff really concentrated it can start to harden.  Usually it doesn't happen for 24 hours but perhaps the heat affected it.  I spit out the mouthful and tried again until I could actually get some that I could drink.  Drink is a relative term as the stuff had become very thick.  It was like having a bottle full of gel.  At this time I also realized that I had been out for 2 hours and hadn't peed.  I didn't even have the urge.  That's not a good sign, but my energy was still very good so I didn't even think that I might be getting dehydrated.   I didn't do myself any favors when I went to take a swig and the top of my bottle broke off.  Now I had to try to keep the sticky gel from getting all over me.

I ran the second loop mostly alone with nobody catching me and nobody in sight.  At the lollipop loop I saw how far ahead Jack and Ryan were, and they were just a few minutes up on me.  The guy in fifth had dropped behind me a bunch so I didn't feel that much pressure.  I just kept on running and my energy felt good.  During this loop I tripped and fell 4 times!   One of the times was right in front of a bunch of people at an aid station.  I had planned on drinking some water but was so pissed that I just got right up and kept running. I spilled a bunch of my drink too.  I finally peed a bit on this loop but still didn't have much urge.  At the time I thought it was a bonus because stopping to pee costs time.  I should have realized that I was becoming dehydrated.

As I came down the hill for the finish of the second loop (1:31:27 for this loop) I saw that Ryan was still at the turn around.  I had caught him!  He looked like he was starting to get tired and I got energized to catch him.  I grabbed my third bottle and took two extra salt tabs as I was starting to cramp a bit.  I quickly took off up the hill in hot pursuit.  Ben and Jack were long gone, but perhaps I could get third today!  As soon as I headed up the hill I knew I was in trouble.  It was getting pretty hot out and I had no energy.  I had to walk what I had run the last two loops and it was like somebody had just turned off a switch on my body.  I started cramping and felt dizzy and terrible.  I walked for a bit and just couldn't bear the thought of waiting for everybody to catch me.


I had come today to push hard, not to just finish.  My mindset wasn't prepared to just survive.  As I walked trying to get the cramps to subside I decided to drop.  I knew that I would hate myself for it later, but for now it seemed like the right choice.  I came to RACE dammit.  I walked for a couple of miles seeing if my legs would come back, but they didn't.  I laid down on a table for a bit and felt the sun on my body.  Even though I had quit, it felt good knowing that I went for it today.  I turned around and did my walk of shame back.  I was surprised to see how long it took the people behind me to catch up, our group of four was pretty far in front of the rest of the runners.

So now I know.  I need to get back to incorporating more long runs into my training.  Or I need to decide if I really want to race at the front.  I also realize that mixing the Vitargo so thickly prevented me from getting enough fluid.  Once you dehydrate your body it is very hard to come back.  So ultimately I learned something.  Hopefully I can take that knowledge to a better result at my next race.
Posted by Nathan Sanel at 7:43 PM

Great piece of writing; the pacing was just right. Sorry your running didn't work out as well. Thanks for sharing.

Stairway looks crazy! Hopefully you learn from this and good luck on your next race. Nice report.

Nate, I think you ought to go back to your old strategy of even pacing. Racing hard like that always caused me to blow up. It is fun for awhile, but you always pay for it later.
Best of luck with 2012!

What Steve just said. Check your ego at the door for a change and just run for the sake of running. Even pace. Enjoy the journey.

Anonymous,
I do enjoy the journey! I enjoy pushing myself to see what I might be capable of. Everybody does these races for different reasons. So you can go ahead and "just run for the sake of running" and I'll respect that. Hopefully you (whomever you are) can respect my reasons too.

Awesome report Nate!! I wish I was back in New England to try this Traprock Race.. I love the look of the rocky course. You know how I always loved those rocky trails.

Hey.. why did you bonk in the end?? Was it nutrition related or did you just run out of gas? Lack of salt maybe?? Sounds like a great effort. Long runs are always the best training... :)

John,
I don't think the bonk was due to nutrition. I think I was taking in plenty of calories. I am pretty sure I dehydrated myself. That, and I need to do more long runs! I've got 5 weeks until my next race. Hopefully I've learned something!
Nate