When the Altra Instinct came out I was psyched.  Finally there was a cushioned zero drop shoe with a fantastic toe box.  You can read my review of the shoe here.  When I first discovered Altra, the shoe I was really looking forward to was the Lone Peak.  After reaching out to Altra and telling them about my PPS they emailed and said that they would like to sponsor my attempt.  They sent me a pair of the Instincts for free and gave me a discount on 2 additional pairs.  I wore them for the Western States 100, the Vermont 100 and part of the Leadville 100.

As the summer wore on the release for the Lone Peaks kept getting delayed.  I couldn't wait for the additional traction and protection that the shoe promised.  When they finally came out my summer of racing was over.  Altra Co-Owner Brian Beckstead reached out to me recently and told me that Altra would love my feedback on the shoe now that it was out.  Originally they had promised to send me a pair for free when they were available.  For some reason, perhaps because my race schedule for the year was complete, Brian said that I could buy a pair at a discount.  At this point I have been using several other shoes as my go-to trail shoes, most notably the New Balance MT110's and Brooks Pure Grits.  I really did not need to buy another pair of shoes, but I had been waiting for these shoes to come out for almost 6 months and I do love the Instincts.  So I decide to take Brian up on his offer and bought a pair.

When they arrived I was super surprised at how stiff they were.  The addition of a rock plate and the additional stack height had turned the familiar shoe into a very rigid one.  I ordered the shoes a 1/2 size smaller on Brian's recommendation and I'm glad I did, as they fit well.  Once again, the toe box is excellent.  Nice and wide with plenty room to splay my toes.   But wearing them around the house the felt noticeably stiffer than the Instincts.  I put them in the closet where they stayed for a while.

Finally I decided to give them a whirl and took them out for a 16 mile jaunt.  Within the first 100 feet I knew that they were a different animal than the Instincts.  My foot felt like it was trapped in a container, rather than being part of an instrument meant to enhance running.  My heel was rubbing up and down against the rear of the shoe with every step because the sole was so stiff that the shoe wasn't flexing with my steps.

As the run continued onto the trails the shoe felt better, but still too stiff.  My foot had no ground feel whatsoever and the lack of lateral flexibility was frustrating.  The increased traction (over the Instincts) was a noticeable improvement.  One thing I noticed right away was that the rudder type thing on the back of the shoe was rubbing my opposite calf a lot and became rather irritating.  If I use these shoes again I am going to cut it off first.  I can't see that it serves any purpose.

Eventually I ran through a stream and discovered another issue.  The shoe doesn't drain.  More specifically, the insole is made of a squishy rubber that seems to absorb water like a diaper and then holds it against the bottom of your foot for the rest of the run.  It never dries out.  My feet were wet for the entire run, even though I ran through the water within the first few miles.  This would be a fatal flaw for me if I was going to run 100 miles in them.  I can't imagine how bad my blisters would be. 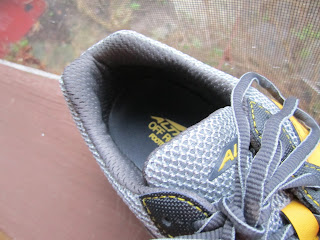 Honestly, I'm disappointed.  I love my Instincts and had such high hopes for this shoe.  It is so over built for my needs and feels just like the shoes I've been so happy to get away from since moving towards more minimal shoes.  Here's how it ends up for me:

If you are looking for a Sherman Tank off road shoe with a zero drop this is your shoe.  For me, it's just to much shoe and lacks the elegance that I'm looking for in an off road shoe.
Posted by Nathan Sanel at 8:10 PM

I have to say a agree with you about this shoe. The Intuition is the best shoe ever, but The Lone Peak is something very different. I can't get over the stiffness, the shoe really doesn't bend with the foot. Even the uppers are so stiff that they causes severe discomfort on longer runs, since they don't allow the widening of the lateral edge of the foot during contact. On the longest run so far I got a painful spot on the lateral side of the foot, where the mountain figure and stiff collar bands form a thick and hard point in the shoe, and the pain remained for many days. I don't know really if I wan't to use those shoes anymore. When I put my Intuitions on, however, my feet feel free and happy.

Would you say that the Instinct actually drains water better than the Lone Peak?

I would say that the Lone Peak drains exactly the same as the Instinct. I had the same problem with the Instincts at Western States, but since I primarily use them for roads it wasn't a big concern. Since the Lone Peaks would be a full time Trail Shoe I would encounter wet shoes more often.