Auburn arrival and Day One of the camp

I met Aliza Lapierre at the Sacramento airport and we shared a rental car for the short drive to Auburn. Along the way we stopped at Whole Foods to stock up. I could live at that place, I wish that we had one at home.  After arriving at the Auburn Super 8 we decided to take a little run of 5 or 6 miles.  We looked on Google and saw that only a little bit down the road had the potential of getting us on some of the trails.  As we headed towards the trails we ran over the highest bridge in California.  I was amused at the signs saying that no horses were allowed. 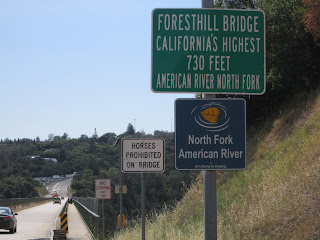 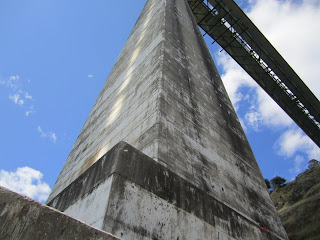 We were amazed at how massive the bridge was.  It made me dizzy to look up towards the top of the columns.  Neither one of us had brought cameras, so we went back a few days later and took the pictures I'm posting now.  While we were there we saw a big snake, which we later identified as a King Snake which is non-poisonous.  We were pretty careful at the time though because we had been warned about many dangerous snakes, including rattlesnakes.

As we were heading back up the hill a rock came flying down from above and landed only a few feet from Aliza.  We were freaked out to say the least as it would have severely hurt us if it we had been hit.  Later we saw a few kids smoking underneath the bridge and I'm guessing that they were throwing rocks.  Sometimes people don't think.....

Saturday 5/28
This morning about 150 people met at the Forest Hill Elementary School in Auburn California to attend the first of three days of training on the Western States 100 course.

We took a bus from the school for a half an hour drive to the start of the days run.  On the schedule was 30 miles.  Unfortunately we were unable to run the canyons due to the excessive amount of snow.  The first four miles of today's run was not part of the course.  We ran from the top of Drivers Flat road to Forest Hill in reverse and then on to Michigan Bluff where we turned around and ran back to the school.

I was under strict instructions from Satan, I mean Coach Jack, to not run fast or hard today.  He told me that he wanted to make sure that I was tired before this weekend so I could go slow and concentrate on learning everything about the course possible.  No problem there, I'm pretty tired.  There were lots of ups and downs today.  Many of the downhills were long, but not that steep.  Only a few of the climbs were steep, but I power hiked most of them in an effort to take it easy.  It actually felt great to take it easy and hike as I have not done any yet this year.

At the 10.5 mile aid station I left with Tim Twietmeyer. I don't usually get star struck, but Tim is a legend at Western States. He has won the race 5 times and has completed it in under 24 hours 25 times! He was great company and I learned a bunch about the course in the hour or so I ran with him.

The 18 mile aid station was back in the parking lot were we started and I thought for a minute about calling it a day.  Luckily that was just a fleeting thought and I went back out to finish the next 12 miles.
After running up a road for a while I headed down Bath Road.  During the race we run up it in the opposite direction, and it is steep.  I was alone and stopped a couple times to see if I was still going the right way, as there were no markings.  After finding the trail I went down a long hill and nice trail to the turn around at Michigan Bluff.  Along the way was a cool stream crossing that required a rope to help you through the rushing water.  I met up with Adam, whom I ran some of the Leadville race and training camp and we had a great time catching up and talking about training, jobs, etc.

It went really well today.  I took it easy and didn't beat up my body to badly.  Tomorrow we have 19 miles on the schedule.  That will give me another 100 mile week of training.  I'm looking forward to seeing more of the course, and I'm also looking forward to getting this week over so I can begin my taper and rest up for the race.
Posted by Nathan Sanel at 11:24 AM