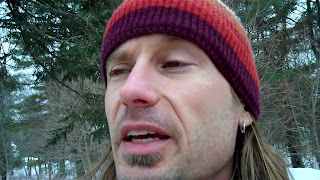 This week was great.  I managed to get in 82.2 miles and still feel excellent.  On Saturday I ran 31 miles on the Rockingham Rail Trail and had a blast visiting with some old friends.  This is the first time I have run over 20 miles since the Manchester Marathon in October and I couldn't believe how easy it was.  This is the first time I have ever run 50k without any soreness or fatigue at all.  It is a huge mental boost for me to think that this slow base building I've been doing has put me in the best shape I've been at this time of year.

The absolute best part of this run was when we stopped at the half way point and were hanging out in the Dunkin Donuts parking lot.  John had micro spikes on his shoes and didn't want to go inside to use the bathroom because they are pain to take off.  So he deciced to go pee next to their dumpster.  His back was turned to the parking lot but some guy who was going through the drive through thought it was offensive to his kids to see somebody peeing and freaked out.  He yelled at John and said "THINK!, I'VE GOT KIDS IN THIS CAR!!!".  John stayed calm and  just smiled at him when he was finished.  Unfortunately when he was finished getting his order he decided that he should be a tough guy and yell at John some more.  He opened the passanger window and yelled over his wife at John.  Again, he said that John should THINK.  John said that everybody pees and he should mellow out.  The guy said that he could call have John arrested for indecent exposure.  John laughed at him and said that his back was turned and he and his kids couldn't see anything.  Then John said the funniest thing I heard all day.  John says "Its not indecent exposure you moron.  You didn't see my penis did you?".  You could see the guy freak that his kids just heard the word penis and he was about to get out of the car when his wife convinced him to leave.

It was hilarious.  Every kid goes pee outside.  I'm sure if the guy didn't make such a big deal out of it the kids wouldn't even have noticed.  Instead he made an ass of himself.  Nice example.  The only thing he could have done better is to have gotten out of the car and actually got in a fight with us.  Pretty stupid.

I never fail to have some type of memorable adventure when I run with this group!  It was a fun day.  Below is a recap of my training for the week.  Keeping with the tradition of last week, I took a video of my Sunday training run to show some of the trails that I'm running on.

2-07-2011
Monday AM - 6 Miles (51:31).
Ran on the treadmill at 8:35 pace. Again, skipped my strength training because I was worried about getting to work in time to be prepared for our weekly meeting.  I think I'm going to move my weights day to Tuesday.

2-10-2011
Thursday - 7.1 Miles (1 Hour)
Ran the snowmobile trails.  First outdoors run in my new Merrell Trail Gloves.  Awesome shoes that have the same feel as my VFF's but no individual toes.  They are extremely well vented and it was 8 below zero.  My feet were freezing.  After a 2.5 mile warmup I did two hill sprints, both up and down, on a .25 mile steep section of the trails.  This is the beginning of my more specific training.  Up to this point all my runs have been very easy base building runs.