The "A.R.T." of staying injury free 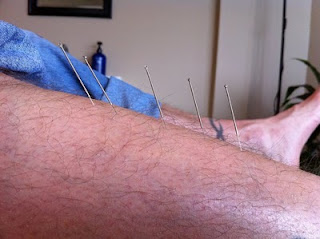 One of my biggest concerns with running five hundred mile runs in five months is keeping my body injury free. I have suffered from chronic anterior tibialus tendinitis for the past few years.  It started with a stress fracture that was the result of attempting to run 124 miles across the state of NH in 2008.  At the time I blamed it on the relentless pounding that hours and hours of running on pavement does.  One Year later, after a successful year of racing injury free, I again ran into this problem when attempting for the second time to run across the state.

At the time I chalked it up to just being at the end of a long season of training and racing.  Or maybe it was the pavement again.  Each time I would run into it I would be forced to reduce my milage from  70-80 miles per week to about 30-35.  I would spend time on the elliptical or running very easy on the treadmill to recover.

Last year I decided to try for a marathon PR, rather than risk it again.  My coach changed my training to include much more speed work.  I was feeling really good until a couple weeks before the marathon when the tendinitis monster crept up on me again.

I got my PR (3:15:10) at the very hilly Manchester NH marathon and was right back in the recovery mode.  My ankle/shin were once again killing me.  During this time one of my employees, who just happens to be a wicked fast pro triathlete, said that my problem might be caused by heel striking.  I had been playing with more minimal shoes and modifying my running form to more of a mid/forefoot strike, but I could only do it so long before I would revert back to mild heel striking.

I decided to give it a better effort and began to really work on my form.  The work started in October and only recently can I honestly say that my form is now transformed.  One of the biggest part of modifying my form has been a switch to shoes that have at the most 4mm of difference between the heel and forefoot.  This prevents my heel from slamming into the ground before the rest of my foot, reducing the amount of stress on my ankle tendon.  Recently I did a 22 mile run in a pair of shoes that have a 7mm differential and my shin bothered me for days.

I realized that I need to do more than just watch my form.  At Amy's urging I made an appointment with Dr. Brett Coapeland.  Brett owns Performance Health in Concord, NH.  He specializes in A.R.T. (active release therapy).  It is very different than the PT that I have experienced in the past.  Brett finds the trouble area then holds it as he has you work against it which releases the tension in the muscle or tendon.  I did a little work with Brett before the marathon on my ridiculously tight hamstrings and it helped a lot.  We have now come up with a plan to work on the tendinitis before it turns into something worse.

My first appointment was this Thursday and after checking to make sure it really was the anterior tibialus that is the problem (it is) he did his ART and then he did something I didn't expect.  He put five acupuncture needles in my shin!  He told me that what he was doing is called dry needling.  It is used on areas of tension to release tension.  I couldn't even feel them being put in and all I had to do was sit with my shin relaxed for a little while.

I am really psyched to be working with Brett.  He really understands what I'm trying to do with my training and racing.  He also is a triathlete and he has even run the VT100!

To test his work I ran 31 miles yesterday and everything is feeling great.  Hopefully the combination of using low or zero drop shoes combined with mid foot running and Bretts care will keep me on my feet this year and not on the sidelines.

Here is this weeks training recap:

Active Release is absolutely amazing. I had undiagnosed Compartment syndrome in both my shin for 3 years when I was a rower (It's not a rowing injury, but doctors don't seem to realize that rowers cross train by running a whole lot). A PT at a triathlon suggested I had it and that I try active release.

So after 3 years of suffering when the rate was too high, after 8 appointments I was breaking through plateaus I didn't even know existed. I haven't had any compartment syndrome symptoms in a long time. I have considered seeing if they can do anything about my plantar fasciitis in the same way, because that's a monster that sneaks up again from time to time.

Good job taking care of yourself!