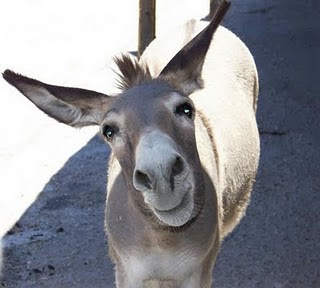 No, I'm not calling anybody names. For those of you not in the "Ultrarunning" world, a "Fat Ass" race event is a race where there are no entry fees, no awards and no whining. It typically entails a bunch of friends getting together and loosely holding a race. This weekend I attended the GAC (Gillys Athletic Club) Fat Ass 50k (31 miles) in Topsfield Mass. I only decided to do this race about 2 weeks ago because I have been feeling good and ready to race.

The last quarter of my running year didn't go so well. First, I dropped out of the Vermont 50 in September. That was my first DNF (did not finish) ever. I didn't let it bother me that much. The weather was miserable and I went out to fast. I quit 20 miles into the 50 mile race. I felt that I made the right decision. Then in October I pulled out early of my attempt to run across NH. Again, it didn't really bother me because I did it as a fun run with John and I went into it with the attitude that I would just run as far as I felt like running. During the run at about mile 50 my shin pumped up. It felt like a shin splint, but I never get shin splints. As the run wore on the pain got worse and started traveling up to my knee. I decided to quit at mile 65 because I didn't want to cause myself any injury. It was a little too late. I ended up having to reduce my weekly mileage from 70-75 to about 30 to heal it up.

Things were feeling better in about 3 weeks and I had already entered the Stone Cat 50 miler in November. Its a fun race that sells out so I didn't want to miss it. My shin had been feeling better and my first loop (12.5 miles or so) felt great. I was on 8 hour pace but I was working to hard. I was trying to run at an easy pace, but got a little bit caught up in the scene. Its easy to do. At mile 16 my shin started to hurt. But it was manageable so I decided to ignore it. By mile 20 I was having a mental battle between re injuring myself and calling myself a pussy. Its hard when your doing an endurance race to know when to quit and when to suck it up and wait until the pain passes. You really have to know what type of pain it is and make sure you are assessing it correctly. When I finished the second loop they give you the option of just doing the marathon distance. I took the option and tried to feel ok about it. Everybody told me that I was being smart, but I was beginning to doubt my mental strength.

I took about 3 weeks of active recovery (30-35 miles a week) and my shin pain has disappeared. My coach, Jack Pilla, ramped up my mileage to a manageable 50 or so for the last 3 weeks and I went into this race feeling great. My goal for this race was to just finish so I could get that monkey off my back. 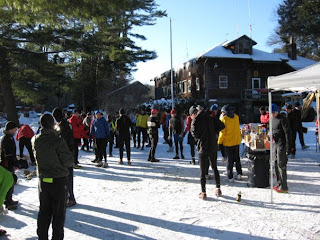 At the start of the race I was standing near the front of the pack when the organizer yelled 3, 2, 1, go! Crap!! I didn't want to be in the front. I didn't want to go out to fast. I just wanted to have a fun day. So, in 3rd place, I decided to just run slow and let everybody pass me. The weird thing is that almost nobody passed me. After about 1/2 a mile I looked back and realized that I was pulling away from the rest of the pack. Crap. What do they know that I don't? I knew that my heart rate was ok, and I really felt like I was running easy so I decided to just keep on going.

This race is a 6.2 mile loop. I had never seen the trail before but I was told that it only had one hill and it was a fairly easy loop. The one thing that was really tough was that at least 4 miles of the 6.2 mile loop was really soft snow. Like running in sugar. Cold sugar. I knew that this was going to suck the life out of most of us so I focused on my running efficiency and my heart rate (just by feel, I wasn't wearing a monitor). I finished the first loop in 59 minutes and felt like I was on a good pace. A few people passed me, and then I saw 2 of them stop after the first loop. I had forgot that at these events many people just show up to run one or two laps. Again, I hoped that I wasn't going out to fast. 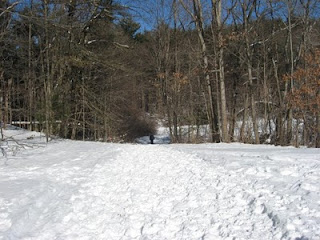 For the first time ever in a race I was listening to music. I wanted to just treat this race like a regular Sunday long run and the music was a great distraction. I tend to sing when I am running with music and this was no exception. I am sure that I must have looked like a lunatic belting out AC/DC's "The girls got rhythm" in the middle of the forest.

I finished the second loop in 65 minutes at 2:05 into the race. I had my cooler at the start finish and decided to use two gels per lap and was drinking a bottle of Gatorade every loop. My stops were no longer than a minute.

The next loop was still easy, but I was starting to feel the affects of the soft snow. There was a stretch about 1 mile long 2 miles from the end of the loop that was so soft and so tough. I was just taking baby steps trying to not extend too much energy. I finished the loop in another 65 minutes, 3 hours and 10 minutes into the race. I took 2 salt tabs, filled up my bottle, drank 1/2 a bottle of boost and headed out again. I started to notice a bit of fatigue, but I also realized that I felt great. This race was my type of race. I'm not that fast, but I'm pretty strong. The fast guys were using a lot of energy trying to run hard in the soft snow. I knew that they were going to burn themselves out. I was just trying to conserve energy and stay in my comfort zone. I noticed people slowing down and I also realized that I wasn't slowing down at all. I finished the fourth loop at 4 hours and 22 minutes. I realized my goal of 5 hours was out of reach, but still felt good about how I was doing. I also didn't realize how much the soft snow was slowing everybody. As was working on my last loop all I could think about was that I couldn't let myself feel tired. I plan on racing the Leadville 100 in August. It is one of the hardest races in America and I was thinking about how I would feel at mile 30 of that race and it might be how I currently felt. I pretended that I still had over 70 miles to go and that helped me just stay focused. I also made a mental promise to myself that if I dropped out of today's race for any reason that I didn't deserve to go to leadville. 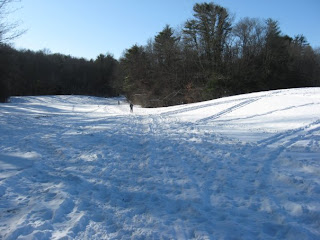 As I crested the hill I realized that I only had less than 3 miles to go and I was going to finish strong. I passed two people on the last loop. I had no idea what number loop they were on, but I was going so strong in comparison I guessed that they were not on their final lap. It turns out that they were. I didn't care what place I was in. I only cared that I had got the monkey off my back and I had finished the race. When I came across the line I saw 5:29 on the clock. I had finished in less than 5 1/2 hours and I was happy. I thanked the volunteers for helping all day and then asked what place I finished in. I was super surprised to find out that the winner had crossed the line in 4:59 and I had finished fourth!

I dragged my cooler back to my car, where I couldn't wait to get out of my wet clothes. Unfortunately I was stuck in the back seat with my left quad locking up every time I tried to take off my socks and shoes. I drank a bunch of gatorade and made some calls until it stopped. I'm sure I looked like a moron clutching and rubbing my quad with my shorts half pulled down in the back seat. But then again, at these types of events that type of behavior is not that uncommon.

It was one of those days where I actually followed my plan, ran my own race, and was rewarded with a great finish. It is a great way to start off the year and I am psyched for more to come.