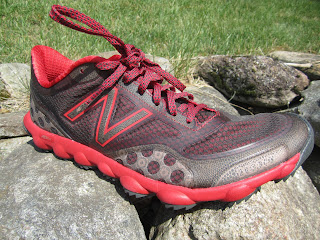 Bryon Powell is such a tease.  He runs irunfar.com and is always getting the scoop on new shoes.  When he posted pictures of the upcoming New Balance Minimus MT1010 Amp's I shot off an email to my contact at NB asking about them.  What I was told was it was built on the Minimus last with the same weight and fit as the MT110's, but with an extra layer of cushioning.

If you've been reading my blog for a while you know that the MT110 is one of my favorite shoes.  I have worn it for the first half of a few 100 mile races (70 at Leadville, 30 at The Bear, 50 at Bartram) and then I change into a more cushioned shoe as my feet start to feel pounded.  The idea of that shoe with more cushioning was extremely appealing.  I immediately began to beg...

Since my foot is not the wear testing size I had to wait until the first size run of pre-production shoes were available.  It was torture, but my pair finally arrived last week. (note: I received these shoes no charge provided by New Balance). I have since used them twice (only 18 miles) and these are my initial impressions.  It is really not fair to review a shoe after so few miles, but I know a lot of people are excited about this one. I am going to use many comparisons to the MT110 as I believe that there are a lot of people like myself who love that shoe, but want a little bit "more" underfoot for long races.


Out of the box, I was immediately struck by how light they are, especially considering that they look much more substantial than the MT110.  A quick trip to my wifes cooking scale (shhh....) shows that NB lived up to their promise.  They are almost the exact same weight as my 110s.  Both are size 11.

The upper material is completely different than the 110.  It is a light mesh that breathes extremely well.  I have not waterlogged them yet, but when I did get them wet they dried extremely quickly.   Like the 110, there is no sockliner. NB addressed a major shortcoming in the 110's.  The tongue is now lasted to prevent dirt from entering.  Thats a good thing, unfortunately I think they used a little bit to much material and I find that it bunches up.  But the material is so light that it doesn't bother me.  I did find that they run a bit larger and have a larger toebox.  I had to tie the (very long) laces so tight that it deforms the shoe a bit.  Again, once I'm running I don't notice it.  Those of you with larger volume feet that find the 110 to narrow will enjoy the extra room.

Once running in them I immediately could feel the extra cushioning.  They still very much feel like a "barefoot" shoe and are extremely flexible, but they have a nice level of softness that is much more forgiving on my feet than a 110 or MT00, etc.  I would describe them as half as cushy as a Brooks Pure Grit and twice as cushy as the 110's.  They are right between the two. 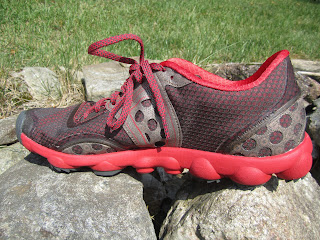 To get to the trails I have to run 1 mile of pavement.  In that short time I noticed a little pressure point under my midfoot.  One of the traction pods placement seems to feel a little bit higher to me than the others, or I just have weird feet.  My wife has said that I have a lot in common with the princess and the pea, so I might be over sensitive. Once on the trails, the pressure seemed to disappear.

The traction on these shoes is awesome.  It's obvious when you look at the sole that they are going to dig in, and that is exactly what I found.  My trails have grass, steep loamy climbs, rocks and roots.  I have not tested them in mountain conditions yet, but everything I have used them in has been awesome.  I did find that small jagged rocks actually can poke into my feet where the exposed "rock plate" is.  I'm sure it's not easy making a protective shoe that still flexes like a barefoot shoe and perhaps these larger gaps are necessary, but I'd like to see them have more rubber here and less exposed plate.

One question everybody who has worn a 110 will ask is "Does it have the same raised lateral feel?".   I did not detect any of that feeling.  It does appear to me that it was reduced or eliminated.

Again, these are just my first impressions.  Since I have PF pretty badly I have been limiting my time wearing minimal shoes.  I am looking forward to putting more miles on them and will update my blog once I do.

SO, as someone who wears minimalist shoes AND Hokas...do you find a shoe like this easy to switch to? My Sports Med Dr want me to wear a more minimalit shoe(I always wear Hoka) and I am afraid as I have extrememly sensitive feet. I don't want to go Vibrams...but something like this...Hmmm...what are your thought? :)

Julie,
I would recommend that you find some type of intermediate step towards a minimal shoe. Don't go right to a bare bones shoe like the VFF's. How about something like the Brooks Pure Grits?
Nate

Thanks for this review, Nate. Very helpful. Can't wait for this shoe to be released. Did NB give any indication of the drop date? I know these things are moving targets...

Mike, I don't have an exact date, but I think it is going to be later this month. If I can get a better idea I'll post it here.

Looks like the new drop date is August 15. I just pre-ordered my 11.5s from runningwarehouse.com!

Road Runner Sports has them online--shipping 8/6

Thanks a lot for your review, short but very informative. It made me more skeptical about the shoes though. Assuming the size is right, there's WAY TOO MUCH material under laces which makes the shoes look at least one size bigger (any movement inside?) Hot spot, the outsole begging for pokings rocks and too much exposed rockplate. I think I'm going to wait for more reviews.
Mark

Anon (Mark),
There is a bit more movement than I would like. I'm not sure if going down 1/2 size would help. Since they are not available yet, I didn't have the opportunity to try 10.5 and 11 on at the same time.
Nate

Nate,
How do you think they will perform in the mud?
Thanks,
J.Mack

I've read your posts about diet and going vegan. I'm considering going vegan to help my running and be more healthy. I have no idea where to start and I hope living in Central Indiana doesn't make it too difficult to make the switch. What tools or resources did you use when making the switch? Thanks.

John,
The tread pattern is very aggressive, much more so than the MT110's. That being said, I really have not had a chance to test them in the mud yet. As soon as I do I'll add an update.
Nate

It would be such a long post on how to go Vegan I don't know if I can address it all here with a comment. For me it worked in stages. First I stopped eating products that come out of a box, then I eliminated wheat. Eventually going Vegan was a small step because it wasn't that far off from how I had been eating. I would suggest that to start, you try doing a day a week where you don't eat anything that comes from an animal or out of a box. Just real whole food. This would give you a great way to find some foods that you like rather than going cold turkey. The best tool for me has been spending a lot of time on the internet studying as well as subscribing to some Vegan twitter feeds. Good luck!

I am currently running in the Pure Grits which I love. I also had the 110's in which I would occasionally rotate in with the Pure Grits. I love the fit. feel and cushioning of the Pure Grits but I hate the severe lack of traction on wet surfaces and no rock plate. My 110's tore across the toe box with only 40 miles on them so NB gave me an $85 credit to the webstore. I don't trust the Pure Grit for fall trail runs with wet leaves and leaf covered rocks. Mine seem to skate when they get the slightest bit. Would you recommend the MT1010's for someone that is currently running in the Pure Grits and someone looking for a shoe with some more traction for Fall. Do you think I'll have any technical issues? I can't wait for the Pure Grit 2 so I'm hoping to use these as a stop gap until those come out in Jan.

Chad,
Yes, I actually would recommend the MT1010 for you. I have run quite a bit more in them since writing this review. The traction is excellent, certainly a ton better than the Pure Grits. They drain very well too. The level of cushioning is right between the MT110 and the Grits. You might want to try them on first as they fit a bit looser than the MT110's. I noticed that Dicks Sporting Goods actually has them in stock! My guess is that you need to go 1/2 size down from your 110's.

wondering if they have torn in 2 months as so many reviews say...just bought a pair and wondering if I should return them before using them....love them from the start though

Mirium,
Mine have not torn, but I do not wear them a ton because I'm testing so many different models. I do have a friend that has torn both shoes. He runs mostly on very rough rocky terrain. I have only used mine on normal New England single track type trails and they are holding up fine.

Hi there,
I have been using both the 1010 and the MT110 and I share many of Nate's observations:
- wear a 13 EE in the MT110 and a 12.5 D in the MT1010 and they fit about the same
- the MT110 feels significantly less cushioned than the MT1010 and has a stiffer upper
- MT1010 has much better grip, in fact, I have not managed to slip on high speed slippery decent even when leaning into bends hard
- once your form breaks down and you slip off the fore/midfoot, the MT1010 is the more foregiving shoe, the MT110 feels better on fore/midfoot striking
- based on the larger stack height, I feel I am more prone to ankle twists in the MT1010

Overall, both are great trail shoes that you can pick up as incredible bargains at around 60% off now.