Its hard to believe that it's been almost three weeks since I've written anything.  It is even harder to believe that in only 2 weeks I'll be toeing the line for another 100 mile race.  Last year Leadville was my only 100 and I absolutely loved it.  The town is cool, the people were nice and the course wasn't nearly as tough as all the hype had me believing.  I feel much less stressed about doing the race than last year, even though my body has been through a lot more.  Last year I was well rested and trained and I finished in a little over 23 hours.  This year, who knows?  It would be nice to get a sub-hour buckle again, but I'll settle for anything that is an official finish (under 30 hours).

I recovered really well from the VT100.  It was actually strange.  I had almost no soreness and was able to show up bright and early Monday for work without the usual "crab walk" that usually happens.  The week after VT I ran 29 miles, the next week 54 miles and this week was a hair under 60.  The running streak is still alive too.  As of today I have run 223 days in a row for a total of 2379 miles.  I think that if I get to one year I'll take a day off and kill the streak.  It is becoming a "thing" and I don't want it to turn into something that I "have" to do.

Last Sunday I ran the "Mansfield Loop" with an incredible group from Vt.  It is a 26 mile loop that has everything from trails to fire roads to rocky trails on "the chin" at Mount Mansfield.  Along with my coach, Jack Pilla, there was Aliza Lapierre,  Nick Yardley, Todd Archambault, Serena Wilcox, Scott and Joyce Holsten and Bob Ayers, Jr.   I was actually nervous to run with this group, even though they are all friends of mine.  They are a speedy group and I haven't been feeling so speedy lately, just tired.

After 12 miles we were at the base of the Mt. Mansfield access road.  It is a steep 4.5 mile auto road with no breaks.  I got about 1/2 a mile up it and just blew up.  I was completely wiped out. My legs wouldn't move and I just couldn't run.

I felt terrible and was worried about being "that guy" who everybody had to wait for.  I realized that we were at about 3 hours into the run, which was exactly the same time I blew up at the VT100.  About halfway up Nick saw that I was struggling and hung back and walked with me.  This was the first time I've really had the chance to talk with him and it really helped.  He offered to run with me back to the parking lot when we got to the top, as I had absolutely no idea how to get back.

When we got to the top the entire group was hanging around chatting and there was no pressure to hurry up and continue.  Jack gently refused to let me leave and after eating and taking a rest I decided to continue.  As we started the more rocky trail and we switched to a faster hike/occasional run I felt better.  The rest of the run was a blast and the views from the top of Mansfield were incredible.  After making it back to the parking lot we took a quick dip and all met at the local store for sandwiches and ice creams.  The total trip took 6.5 hours and was a blast.

This last week we spent at the beach in Ogunquit Maine.  Since I'm not much of a beach goer I spent most of the early part of the days riding my bike and going for short runs.  I discovered some great roads right outside of town and really enjoyed riding.  Right now I'm having a little bit of a hard time finding the motivation to run.  The biking really helps break it up a bit.  In the evenings we had a blast goofing around, going to nice restaurants and partaking in a drink or two.

Today for my long run Jack had instructed me to run 30 miles of "Big Hills".  He wanted me to do some mountain hiking/running to help prepare me for the upcoming race.  I couldn't find anybody who wanted to join me for a Pemi-loop of in the presi's so I decided to go to Pats Peak. 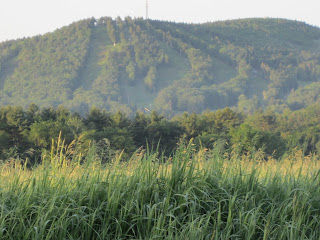 I've posted here before about running there.  The Mountain Bike course is 5.15 miles and each loop has about 1000 ft of elevation.  Not as tough as the White Mountains, but I figured it would do.  The plan was to do 6 loops.  I have never done more than 4 so I knew it would be a big undertaking.  I started off well, running the entire first loop, but I quickly knew that it wasn't in me to do the full pull.  I ended up doing 3.5 loops plus a power hike up the steep access road.  It came to a little more than 20 miles and took me almost 4 hours.  I called it a day and for the first time in a long time I actually listened to my body and didn't push it.

So its time to taper, rest my tired body and get ready to take on the altitude in Colorado.  Part three of the Potentially Painful Summer, here I come!
Posted by Nathan Sanel at 6:59 PM

You're ready friend. Get grumpy and taper.. ease in to Leadville.. run smooth and swift.. then get ready for THE BEAR. Almost done my man..

We enjoyed having you in Vermont and please come and play anytime. I am excited for you to have Leadville next and cannot wait to see what it has in store for you.

It is a pleasure to have you come and run in the Green Mountains with us and I hope you'll come back soon so we can show you more of our favorite loops.

I am excited that Leadville is next for you and I am eager to see how your adventure there unfolds.