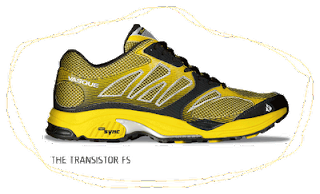 I'm a bit of a shoe fanatic. I used to make fun of my wife for the amount of shoes that she has (and wants) but now I can't say a thing. Since I began running I have always been in search of the perfect shoe. The truth that I discovered is that there is no such thing. Since I run both road and trails (and races/courses that have both) I have found that different types of terrain demand different types of shoes.

There are so many variables to running that different types of runs and terrain demand different types of shoes. My usual week this time of year consists of 65-80 miles. I run a mid-week long run of about 15 miles and a weekend run that is almost always over 20 miles. During those long runs I typically run some paved roads to get to trails and the trails have smooth single track to muddy, swampy, sandy, hilly sections.

In the last year I have found that I like lower, softer shoes. My favorite shoe for just pavement is the Nike Free 5.0. I find this shoe to feel almost non-existent on my foot, but it has enough cushioning to protect my feet. The problem is that as soon as the road turns to trail the shoe is terrible. It has no off road traction and doesn't drain water at all.

In my quest to find an offroad shoe that feels similar I have turned to the New Balance MT100. This new shoe from NB feels like a slipper, but has a thin sole that has a rock protection plate in it. I love this shoe, but for longer runs that have considerable pavement they are too thin. Anything over 20 miles in these shoes feels to hard.

Between these two shoes I'm pretty much covered for most of my regular training runs. The problem is that I am training for several 100 mile races (VT100 and Leadville Trail 100). Both of these runs consist of some pavement, some trails and lots of hardpacked dirt roads. Neither of the above mentioned shoes are going to work for me as the Free's don't work for off road and the NB's don't have enough cushioning for running 20-25 hours.

Last week I got the new edition of Trail Runner which has a review of new trail running shoes. In the review there was a shoe that caught my attention. The Vasque Transistor FS. They were described as low to the ground, lightweight (10.4 oz) and looked to have a lot of protection and cushioning. My only concern was that they looked like every other over built trail shoe.

I decided to take a trip over to EMS in Concord because I noticed last week that they had a bunch of new model trial shoes in stock. I thought that I might have seen the Vasque and I had to go see if I remembered correctly. 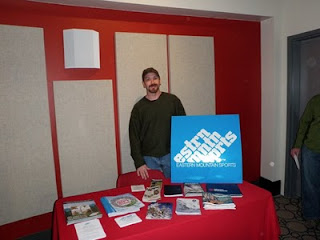 Upon walking into the shop I was immediately greeted by Garrett and Joe. Garrett says "Nate, glad you came in, we have a bunch of new shoes that you should check out!" I walked over to the wall and was psyched to see that they had the Vasque in stock. Garrett grabbed a 10.5 and I was extremely surprised at how they felt. Although they looked burley, the felt super light and surprisingly low to the ground. The souls felt flexible which is extremely important to me. I hate running in shoes that don't flex with my feet. The other thing I noticed was that there was no insole to the shoe. I've never had a shoe like that. The shoe felt very comfy and had a lot of room in the toe box, which is great because I have long monkey toes and often I feel my toes against the front of the shoes when descending, even when they are not to small.

I bought the shoes for $100 and took them out the next day. I took them on a route that would throw everything at them. I left my house and ran 2 miles of pavement to the trail head. They felt great on the pavement. A little stiff in the heals compared to the frees, but acceptable. As soon as I got on the trails I fell in love. I felt low, but protected. This is exactly what I've been looking for. I could feel every element of the trail but still had cushioning. After about .5 mile the trail heads up a big muddy hill that is covered in fallen branches. The grip felt excellent and I wasn't slipping at all. What goes up must come down and the steep following hill offered me the first chance to see if my feet would stay put or if they would jam in the front of the shoe. Again, they felt great and had lots of traction at the steep muddy bottom.

The trail then dumps out to a class 6 road that is wet and rocky. This is the first time I had a chance to run in the shoes wet. I would like to see a little bit better draining as the shoes felt like the held in the water a little bit longer than I am used to in the MT100s. It wasn't bad and to be fair, I have never found a shoe that drains better than the New Balances. The rest of the run had a little more pavement and lots more wet, muddy trail. It is a out and back run so I turned around and went through the same on the way home. I finished thinking that the shoe was low and feels thin underfoot, but still offered way more padding and protection than a typical minimalistic shoe would.

I can't give a full opinion of these shoes until I take them on some more longer runs, but after that first run I am really looking forward to putting some more miles on them. I think I might have just found the SUV of trail running shoes for those of us looking for a minimalistic shoe that acts like a burly trail runner.

These are my fist pair of Vasques, and I'm impressed.
Posted by Nathan Sanel at 8:24 PM

I saw these come in at Work and was curious about them. Thanks for the input and I hope to hear more about them. They look like the cats meow.